Each character exhibits a unique and almost odd nature that could easily be hard to capture. Much to my delight, the actors in the production had no such trouble.

The play begins with Jack and Clyde on break from their limo jobs they got from Jack’s uncle, discussing Connie.

Clyde is expressing his intentions of setting his friend up with Lucy’s coworker, all as Jack starts playing a reggae song claiming it has positive vibes. This little fact becomes important later.

As it goes, he succeeds and they have a “get to know you” session at Clyde and Lucy’s apartment. Connie reveals her rather sad past before Lucy returns with ice cream.

A while later, Jack returns to his friends and reveals that he and Connie discussed boating, this being the inciting incident for the whole play. This begins Jack’s quest to impress Lucy, despite his awkward and rather shy nature.

Lucy, who is timid and skittish with men after having been attacked, does indeed open up to Jack and asks him to cook for her by claiming no man ever has. Lacking the knowledge of cooking, Jack asks Clyde for help. Clyde, being a good friend, tells him to go to The Cannoli, an assistant pastry chef at a fancy restaurant.

Jack thanks him before asking if he should really call the man Cannoli and Clyde says no, revealing that he called him that after he found out Lucy had an affair with him for two years.

Jack then leaves, worrying about his own relationship and fearing that Connie may cheat on him.

The fateful day finally arrives. Jack has mastered the art of cooking pork chops and au gratin and is ready to cook for his beloved and his friends.

Yet, as the food is cooking, a drunk and high Clyde begins to make a toast to Jack as they smoke the hookah that Lucy bought, which results in the burning of Jack’s food.

In a whirlwind of emotions he rushes into Clyde and Lucy’s bedroom, angry and upset. To eventually calm him, they begin playing the reggae song from earlier. Jack returns and the scene skips.

Now, while Connie is in the restroom, Jack, Clyde, and Lucy begin to snort cocaine and talk.

Suddenly, the door buzzes, indicating someone is outside. They all freeze, and Clyde states that it is the Cannoli, whom he drunkenly invited to show Lucy he was cool with it.

Sadly, when the Cannoli leave, Clyde and Lucy have a loud and extreme argument, resulting in a makeup at the end, but Connie and Jack flee.

Later, the two make love before the scene ends. The curtains open again to show Jack and Connie going boating.

Now this play, in my opinion, was done extremely well.

I spoke with Moore after the play and asked what it was like to act in this play and she told me, “It was a lot of fun but really difficult to capture characters with so much emotion and quirks.”

Lucky for her and her fellow actors, that wasn’t the case. They perfectly captured the spirit of these characters.

Parks was the idle Jack, acting very shy and a bit awkward, which is exactly how Jack is.

Cindrich was sweet and timid, just how Connie was described in the actual play. Bacon made Clyde into a larger than life, humorous character, which I, and everyone else in the audience enjoyed immensely!

Last but not least, Moore played the perfect Lucy, being gentle at times and a raging whirlwind of anger at others. In all accounts, bravo to the person that cast these wonderful actors in this play and of course to James Bristow, who directed it.

Speaking of directing, Bristow made some interesting artistic choices with the play, which truly worked well.

In some scenes where Jack and Clyde go swimming, lights were used to simulate the bottom of a pool instead of using props.

This is an important choice and honestly made it seem a lot better than if something else was used. Bristow made more choices that differed a bit from the play, but all in all, they worked out well.

Sadly, ‘Jack Goes Boating’ is no longer going to be playing at Porterfield Hall so I hope that many of you took the time to see this amazing play.

However, there are more plays later this year, the next being ‘Clybourne Park,’ which will be playing from October 11-12 and October 16-18. I hope to see more of you there to see if Radford can pull another amazing play out of its hat. 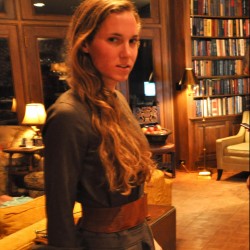