A wall of yellow-clad faculty and staff positioned themselves between students attending The Bigger Picture March and Rally on Radford University’s campus Sept. 19 in response to online threats of violence against organizers and students.

Ren, being a white female, was moved to “do something that showed allyship” with the students of color facing the threats.

A group of more than 25 RU employees assembled on the Muse lawn wearing yellow shirts before 4 p.m. When asked by a Tartan reporter, they identified Michele Ren, an associate professor of English and gender studies, as their de facto leader Saturday afternoon.

Ren was asked by student organizers of the Bigger Picture March and Rally to give a two-minute speech, but when what she called “local opposition” started up on social media, Ren, being a white female, was moved to “do something that showed allyship” with the students of color facing the threats. Ren said she didn’t “want to take the stage away, especially from Black students who had something to say.”

“So I decided to do this wall of moms,” Ren said. “It’s based on what happened in Portland [Oregon] over the summer, in much more violent circumstances, and so ours—we’re hoping—is just symbolic support.”

The group wasn’t exclusively comprised of moms, but instead featured an array faculty seeking to underpin the students’ rights to speak out for racial justice.

Dr. Mathew Smith, the Dean of the College of Humanities and Behavioral Sciences, was among those who positioned themselves around the parameter to put themselves between the students and any potential trouble.

“For me personally, it was a way to show support for our students, hoping to signal to them that—quite visibly—’we’ve got your backs,'” Dr. Smith wrote to The Tartan Sept. 22.

During the week leading up to the event, a slew of anger fomented in local social media groups after a Pulaski County newspaper and Virginia State Senator Amanda Chase called the Bigger Picture March and Rally a Black Lives Matter event.

Those statements came as a response to President Hemphill’s Sept. 14 university-wide email. He announced he would attend the student-organized event; however, the only invocation of the phrase, Black lives matter, was in the fourth paragraph of President Hemphill’s open letter.

“As we move forward together in sharing a united message that Black Lives Matter, I am asking members of Highlander nation to pledge in serving as active and vocal participants by advocating for equality and fairness now and well into the future,” President Hemphill wrote.

For the rest of the week, Radford oriented Facebook groups were awash with fear of violence and barely veiled threats against potential march and rally participants.

In response, RU hired Rhino Sports and Entertainment Services, a company specializing in event security, to keep anyone who’s not a current student, faculty, or staff from coming onto campus during the march and rally.

Even with RU’s safety measures in place, Ren had still organized the yellow-shirted coalition, and despite the threats, Ren’s hope for a peaceful protest came to fruition.

“We commend our students’ leaders who were dedicated to sharing their message and lifting their voices in unity today,” wrote Caitlyn Scaggs, the vice president of University Relations, in an email to the Roanoke Times Saturday evening. “The six student organizations that planned today’s event pledged to maintain a peaceful, respectful, and safe environment with public health guidelines in place.

Even with RU’s safety measures in place, Ren had still organized the yellow-shirted coalition, and despite the threats, Ren’s hope for a peaceful protest came to fruition.

“Today, they maintained that commitment by setting an example for how individuals who care deeply about issues can share their experiences and opinions while maintaining care and compassion for one another. We are tremendously proud of our students, especially those who organized today’s event. We are also proud of the students, faculty, and staff who joined alongside them to share a message of equality and unity.”

Dr. Smith also wrote to The Tartan, “May I add how immensely proud all of us who attended are of our students? They raised their voices in a peaceful but deliberate moment of leadership.”

Karen Derry, a member of the wall of yellow shirts, said she came out to the Bigger Picture March and Rally to support the students. “I think this was, I don’t know, an amazing opportunity for them to, you know, make a statement and speak out for themselves.”

“I also got the impression that people with cars and motorcycles that are really loud kept trying to drive by to drown us out.”

Dr. Joanna Hunter, an assistant professor for CHBS, said she heard somebody drive by and yell all lives matter, to which she turned and gave the middle finger. Hunter said, “it seemed right; I did what was in my heart.” 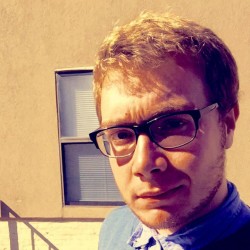 Camden Lazenby
Occasionally a sideline reporter on ESPN+. President of the Society of Professional Journalists at Radford University. Bylines in The Tartan, TheFourthTurn.com, and Rubbings Racing.