We should as people, should be extra careful of what comes out of our mouths, sensitive, and fully aware of other people’s cultures and what might and might not offend a specific community.

Being a celebrity or a public figure, you should be extra conscious about all of that, because if you’re not capable of being thoughtful and considerate of other people’s feelings, then at least do yourself a favor and learn about all the intuitive matters that might negatively affect a large-scale of our country.

Katy Perry’s new shoe line, which seems to resemble the stereotype of blackface, has enormously offended the black community for depicting the blackface on the upper part of the mules.

Amanda Rogers, a junior at Radford University, said that “The new Katy Perry line has received backlash from many communities about the resemblance of blackface. I think this launch has really affected the black community in general because of the history of blackface, so it’s extremely offensive.”

After launching her shoe collection, the shoes that depicted blackface went viral on Twitter, and many people demanded an explanation from Perry. After Perry’s team took action and pulled the offensive collection from several retails and websites, Perry released a statement to USA TODAY saying that it wasn’t her intention to bring any sort of harm.

“I was saddened when it was brought to my attention that it was being compared to painful images reminiscent of blackface. Our intention was never to inflict any pain,” said Perry on a statement from People.com.

When you offend a group of people and then release a statement and appear in media to emphasize the fact that “this wasn’t your intention,”  it doesn’t make a difference to the people that you’ve offended. What you should have done is studied with your team all the aspects, angles and the consequences before designing a pair of mules that have the blackface on them.

They also should have made entirely sure that if there was a 1 percent chance that your collection might hurt other’s people feelings, then you shouldn’t risk it.

Christopher Triplett, a junior at Radford University said, “I think the black community will receive Katy Perry’s recent shoe launch as offensive. The Rue model, of Gucci’s recent collaboration with Katy Perry, depicts a black base shoe with large red lips, blue eyes, and a triangular nose. This has been perceived as a depiction of the derogatory practice, blackface.”

Perry’s collection caused a huge disturbance within the community.

Being oblivious and insensitive is never OK, and offending people by putting what depicts stereotypes because of the lack of feeling one might have will never be observed as what someone might think as a fashion statement. 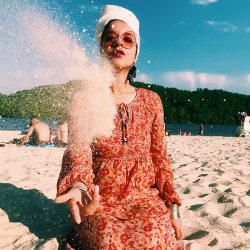