A car crashed around noon this past Thursday, April 7, on the bookstore side of the upper Dalton Hall parking lot.

The car plowed into a light pole and soon after it flipped one and half times down the small grass hill and landed on its left side.

The driver, 20-year-old freshman Shakeif Robinson, was uninjured, but was arrested later in the day for two misdemeanor charges; reckless driving and driving without a license, which had been revoked. He showed no signs of intoxication.

Another problem for Robinson was that the Toyota Scion XB is not his. It belongs to junior Michael Mandzak, who was in class at the time.

On Sunday, April 10, Mandzak set up a Facebook page entitled “Dalton Drive Thru, B3ATBOX fund.” According to the page, he is taking donations to pay for the damages.

The event ends Friday, April 23 at 5 a.m. 60 people were attending at the time of print for The Tartan, with over 500 who are yet to reply.

Prior to the crash, the driver appeared to be searching for a parking space. When he discovered there were no open spots, he attempted to turn around, but appeared to hit the gas instead of the brake, lurching forward onto the sidewalk.

The car hit a light pole, which fell and damaged two parked cars; a blue Ford Fusion and a red Ford Ranger. The Fusion suffered a broken windshield and dented roof, while the Ranger had hood damage.

Students immediately ran over to help the driver and see what had happened. Police and the fire department arrived shortly after, blocking off the area as the crowd grew.

A tow truck was soon on the scene, pulling the car back to an upright position to the cheer of the group surrounding the accident.

Several people helped to lift and slide the pole off the damaged cars and down the hill, away from the sidewalk. 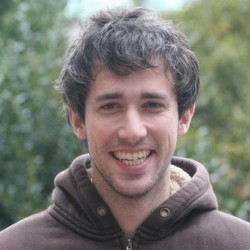 Latest posts by colin.daileda (see all)